Trenbolone hexahydrobenzylcarbonate is a slow-acting injectable ester of the potent anabolic steroid trenbolone. Trenbolone appears most commonly as trenbolone acetate, which is a much faster-acting form of the drug (see: Finajet). The hexahydrobenzylcarbonate ester used here extends the release of trenbolone for more than 2 weeks, which has always been thought of as more suitable for human use due to the less frequent injection schedule. The base steroid trenbolone is roughly three times more androgenic than testosterone, making it a fairly potent androgen. It also displays about 3 times greater tissue-building activity in comparison to its androgenic properties, making its official classification as that of an anabolic steroid. The muscle- building effect of trenbolone is often compared to such popular bulking agents as testosterone or Dianabol, but without the same estrogen related side effects. It is most commonly identified as a lean-mass-building drug, and is extremely popular with athletes for its ability to promote the rapid buildup of strength, muscle size, and definition. 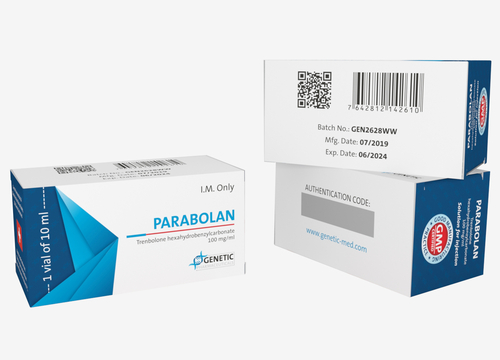 (Men)  Trenbolone hexahydrobenzylcarbonate was generally administered in a clinical dosage of 3 ampules per month. Therapy was initiated the first month with all 3 ampules given over the first 15 days. During the subsequent 3 months, one injection (76 mg) was given every 10 days. For physique- or performance-enhancing purposes, trenbolone hexahydrobenzylcarbonate is most often administered at a dosage of 152-220 mg per week. The drug would be taken in cycles ranging from 6 to 12 weeks. Although a weekly administration schedule would be more than sufficient, athletes usually injected a single ampule (76mg) at a time, and the total amount would be spread evenly throughout the week. Although not necessary, this type of schedule helps to reduce injection volume per application. The results with the use of trenbolone hexahydrobenzylcarbonate should be a visibly more muscular physique (larger, leaner), and, if body fat levels are low enough, that hard ripped look most valued by dieting and competitive bodybuilders.

While this drug is quite potent when used alone, it is sometimes combined with other steroids for an even greater effect. Leading up to a show one could successfully add a nonaromatizing anabolic such as Winstrol or Primobolan. Such combinations will elicit a greater level of density and hardness to the build, often proving dramatic for a stage appearance. We could also look for bulk with this drug, and addition stronger compounds like Dianabol or Testosterone. While the mass gain would be quite formidable with such a stack, some level of water retention would probably also accompany it. Moderately effective anabolics such Deca-Durabolin or Equipoise would be somewhat of a halfway point, providing extra strength and mass but without the same level of water bloat we see with more readily aromatized steroids.

(Women) Trenbolone hexahydrobenzylcarbonate was generally administered in a clinical dosage of 3 ampules per month. Therapy was initiated the first month with all 3 ampules given over the first 15 days. During the subsequent 3 months, one injection (76mg) was given every 10 days. Given the risk of virilization, lower doses were likely used by physicians with many female patients. This agent is generally not recommended for women for physique- or performance-enhancing purposes due to strong androgenic nature and tendency to produce virilizing side effects.

(Estrogenic)  Trenbolone is not aromatized by the body, and is not measurably estrogenic. It is of note, however, that this steroid displays significant binding affinity for the progesterone receptor (slightly stronger than progesterone itself ). The side effects associated with progesterone are similar to those of estrogen, including negative feedback inhibition of testosterone production and enhanced rate of fat storage. Progestins also augment the stimulatory effect of estrogens on mammary tissue growth. There appears to be a strong synergy between these two hormones here, such that gynecomastia might even occur with the help of progestins, without excessive estrogen levels. The use of an anti-estrogen, which inhibits the estrogenic component of this disorder, is often sufficient to mitigate gynecomastia caused by progestational anabolic/ androgenic steroids. Note that progestational side effects are more common when trenbolone is being taken with other aromatizable steroids.

Side Effects (Androgenic) Although classified as an anabolic steroid, trenbolone is sufficiently androgenic. Androgenic side effects are still common with this substance, and may include bouts of oily skin, acne, and body/ facial hair growth. Anabolic/androgenic steroids may also aggravate male pattern hair loss. Women are also warned of the potential virilizing effects of anabolic/androgenic steroids. These may include a deepening of the voice, menstrual irregularities, changes in skin texture, facial hair growth, and clitoral enlargement. Additionally, the 5-alpha reductase enzyme does not metabolize trenbolone575, so its relative androgenicity is not affected by finasteride or dutasteride.

(Hepatotoxicity) Trenbolone is not c-17 alpha alkylated, and is generally not considered a hepatotoxic steroid; liver toxicity is unlikely. This steroid does have a strong level of resistance to hepatic breakdown, however, and severe liver toxicity has been noted in bodybuilders abusing trenbolone. Although unlikely, hepatotoxicity cannot be completely excluded, especially with high doses.

(Cardiovascular) Anabolic/androgenic steroids can have deleterious effects on serum cholesterol. This includes a tendency to reduce HDL (good) cholesterol values and increase LDL (bad) cholesterol values, which may shift the HDL to LDL balance in a direction that favors greater risk of arteriosclerosis. The relative impact of an anabolic/androgenic steroid on serum lipids is dependant on the dose, route of administration (oral vs. injectable), type of steroid (aromatizable or non-aromatizable), and level of resistance to hepatic metabolism. Due to its non-aromatizable nature and strong resistance to metabolism, trenbolone has a moderate to strong (negative) impact on lipid values and atherogenic risk. Anabolic/androgenic steroids may also adversely affect blood pressure and triglycerides, reduce endothelial relaxation, and support left ventricular hypertrophy, all potentially increasing the risk of cardiovascular disease and myocardial infarction.

To help reduce cardiovascular strain it is advised to maintain an active cardiovascular exercise program and minimize the intake of saturated fats, cholesterol, and simple carbohydrates at all times during active AAS administration. Supplementing with fish oils (4 grams per day) and a natural cholesterol/antioxidant formula such as Lipid Stabil or a product with comparable ingredients is also recommended.

(Testosterone Suppression)  All anabolic/androgenic steroids when taken in doses sufficient to promote muscle gain are expected to suppress endogenous testosterone production. Without the intervention of testosterone-stimulating substances, testosterone levels should return to normal within 1-4 months of drug secession. Note that prolonged hypogonadotrophic hypogonadism can develop secondary to steroid abuse, necessitating medical intervention. In experimental studies, trenbolone was determined to be approximately three times stronger at suppressing gonadotropins than testosterone on a milligram for milligram basis.